Homepage > The Apparition of Our Lady at Knock, IRELAND

The Apparition of Our Lady at Knock, IRELAND 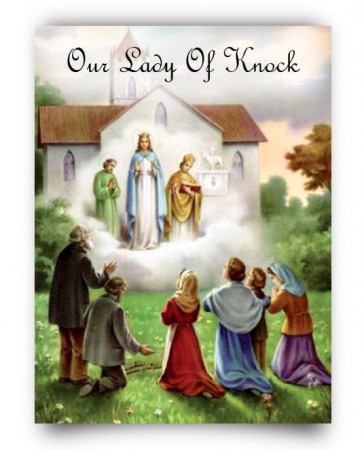 The Apparition of Our Lady at Knock, Ireland

In Knock, Thursday 21 August 1879, began in a very ordinary way. People made the most of the dry weather by working outdoors. They saved hay, brought turf from the bog, aired bedding and hung clothes out to dry.

Once her work was done, Mary McLoughlin, the housekeeper for the parish priest, visited the Byrne family. They lived in a thatched cottage near the Church. By evening the weather had changed and it started to rain heavily. Around eight o’clock she began to make her way home accompanied by Mary, eldest daughter of Mrs. Byrne.

As they approached the church, Mary Byrne cried out, “Look at the beautiful figures.” Moving closer the two women saw a radiant figure and Mary Byrne exclaimed, ‘It is the Blessed Virgin.’ On either side stood St. Joseph and St John the Evangelist and to the right an altar. On this altar stood a lamb surrounded by angels and behind it a large cross.

Mary Byrne ran home to tell her family of the wonderful sight. Her mother, brother, sister and niece all went out. They too saw the Apparition.

Mary then hurried to tell the neighbors living near the church. Soon a small crowd had gathered at the gable. As they gazed at the Apparition they recited the rosary and other prayers. The vision lasted for about two hours from daylight to darkness. Rain saturated the witnesses but not a drop fell either on the gable wall or onto the vision.

The Profound Implication of the Apparition of Our Lady at Knock

The apparition of Our Lady at Knock can be said unique in history, for the apparitions of the past had never been like this, with the appearance of several figures at the same time. Therefore, the apparition is of importance, and each of them has its own specific duty to send some messages to us.

The Lamb, altar and cross: A lamb stood on the altar with a great cross behind, which suggests that the lamb was slaughtered. According to biblical records, the slaughtered lamb could only be found in the Revelation (Revelation 5: 1-7). Its appearance is to take the scroll from the Most High and to unlock the seal. Thus, the appearance of  "slaughtered lamb" indicated that the scroll would be taken and the seal unlocked. All of the above-mentioned indicated that the end time is coming.

The other implication is that those who are willing to follow the Lord Jesus and to serve God wholeheartedly with all their hearts, souls, minds and strengths, are to be slaughtered and sacrificed as the lamb.

Our Lady: She appeared in the image of Queen of Heaven and Earth, wearing a crown, with hands open, eyes looking up towards Heaven, all of which suggested the declaration of last war with Satan. It is the war of the last days.

St. Joseph: As the Patron of the Church, St. Joseph, had never been publicly shown in the past. His appearance during this Apparition suggested that the church was about to experience a major crisis. As a result of Satan's attacks, a devastating disaster will befall the church. He bowed his head, with folded hands, praying for the church, for the church of the future - the church of the eschatology.

Saint John: St. John seemed to be preaching, with his left hand holding an open scroll and the right hand rising high. The gesture conveyed us that the Word of God, the Truth and the teachings of Jesus should be re-preached by the “apostles” during the last days.

Another implication: According to the bible, St. John received a small scroll from the angels (see Revelation 10: 8-11). Now he holds an open scroll, which suggested that what was written in the scroll has been launched and the end time is coming.

The Implication of Silent Apparition: the whole process of the Apparition is silent. The implication is that in order to survive this eschatological period, it is not enough to have a good personal relationship with the Lord or a deep spirituality. We have to be united with Him. (See St. John of the Cross: We know God in the silence).

Conclusion: A common message among the different figures of the Knock's Apparition is that the end time is imminent, which is the key point.

The Apparition of Our Lady at Knock in Ireland not only indicated the advent of the last days, but also implied that the prophet of the end time will emerge in Ireland. The little scroll mentioned in the Revelation will be revealed first in Ireland.