Our Lady of Mount Carmel - 16 july 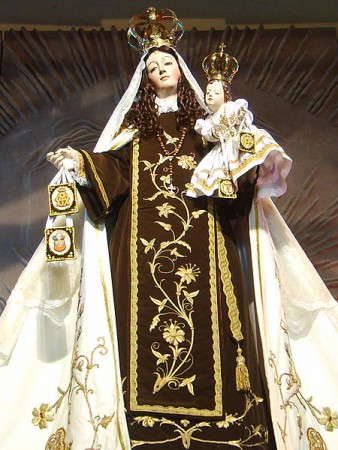 "O most beautiful Flower of Mount Carmel, Fruitful Vine, Splendour of Heaven, Blessed Mother of the Son of God, Immaculate Virgin, assist me this my necessity. O Star of the Sea, help me and show me herein you are my Mother.
O Holy Mary, Mother of God, Queen of Heaven and Earth, I humbly beseech you from the bottom of my heart, to succour me in this necessity; there are none that can withstand your power.
O, show me herein you are my Mother, O Mary, conceived without sin, pray for us who have recourse to thee." (3 times)
Sweet Mother, I place this cause in your hands. (3 times)

Our Lady of Mount Carmel is the title given to the Blessed Virgin Mary in her role as patroness of the Carmelite Order. The first Carmelites were Christian hermits living on Mount Carmel in the Holy Land during the late 12th and early to mid-13th century. They built in the midst of their hermitages a chapel which they dedicated to the Blessed Virgin, whom they conceived of in chivalric terms as the "Lady of the place." Our Lady of Mount Carmel was adopted in the 19th century as the patron saint of Chile, in South America.

The solemn liturgical feast of Our Lady of Mount Carmel was probably first celebrated in England in the later part of the 14th century. Its object was thanksgiving to Mary, the patroness of the Carmelite Order, for the benefits she had accorded to it through its difficult early years. The institution of the feast may have come in the wake of the vindication of their title "Brothers of the Blessed Virgin Mary" at Cambridge, England in 1374. The date chosen was 17 July; on the European mainland this date conflicted with the feast of St. Alexis, requiring a shift to 16 July, which remains the Feast of Our Lady of Mount Carmel throughout the Catholic Church. The Latin poem "Flos Carmeli" (meaning "Flower of Carmel") first appears as the sequence for this Mass.